One of the more interesting recent, long, completed epic fantasy series Shadows of the Apt, by Adrian Tchaikovsky. Published in ten volumes between 2008 and 2014, the series is set in a world where different types of human have been affected by an ancient magical merging with strains of insect, resulting in the methodical, industrial beetle-kinden and the aggressive, expansionist wasp-kinden, among many others. 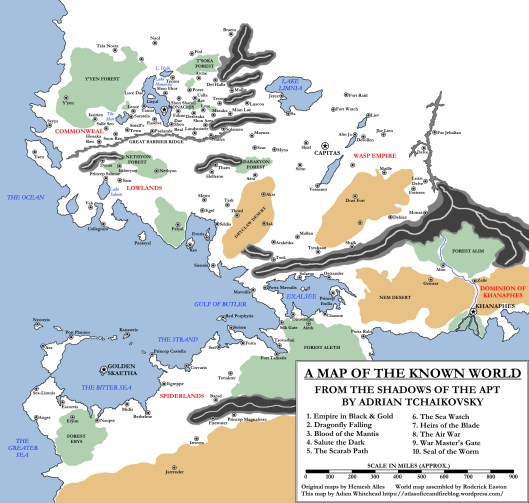 A map of the known world in Shadows of the Apt. Please click for a larger version.

The series features an unusually high level of technology for an epic fantasy, incorporating steampunk elements and the development of mechanical aircraft. This results in a series of conflicts which are wide-ranging and fast-moving, with hundreds of miles covered by military vehicles in rapid advances. Over the course of the series, the conflict which begins with the Wasp Empire invading the loose alliance of Lowlands city-states widens to span an entire continent and numerous other factions.

Maps for the books were created by Hamesh Alles, and later assembled by series superfan Roderick Easton into one combined map, which provided the basis for this map.