Fear not! My maps of A Song of Ice and Fire will return, but in the meantime we’ll take a break to look at the geography of another fantasy world, that of Steven Erikson and Ian Cameron Esslemont’s Malazan franchise.

If you are not familiar with the Malazan world of novels and short stories – which now fill twenty-one books with many more planned – then please check out my Malazan Franchise Familiariser, which covers the basic setting, and my Malazan Reading Order, which presents the best order to read the books in.

It should be noted that the maps that follow were created primarily by D’Rek of the Malazanempire Forum, in discussion with myself and other fans over the course of many years. The primary sources are the maps and descriptions in the novels and a rough, working world map provided by Steven Erikson to the admins at Malazanempire several years ago which has been refined as the novels introduced new locales or revised earlier-existing maps. 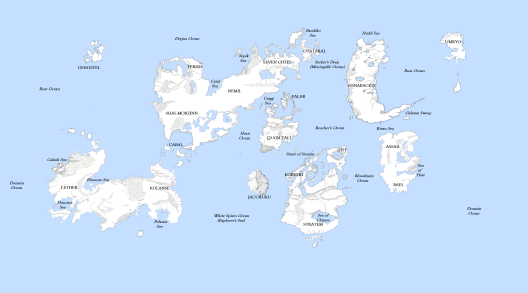 The world of the Malazan Empire. This map is approximately canon, based on Steven Erikson’s rough working map, although the relative sizes of the landmasses may be open to change. The coastlines of Stratem, central Lether and western Seven Cities are speculative. Click for a larger version.

The world that the Malazan Book of the Fallen and its associated novels takes place on has no unified name. It consists of more than a dozen continents, subcontinents and large islands that fall into the grey areas inbetween.

It is known that the world is a globe many thousands of leagues in circumference. The climate of the world was once said to be predictable and natural, but there have been hundreds of thousands of years of magical cataclysms which have disrupted the natural order. Most notably, vast fields of ice are found in unusual places across the world, even equatorial regions. These are the creation of the ancient Jaghut whose sorcery derives from Omtose Phellack, the Warren of Ice. The wars between the Jaghut and the T’lan Imass saw massive ice fields form across the planet. Hot deserts now exist where cold plains should be located and sweltering equatorial lands have been rendered cool and breezy by the presence of vast glaciers where none should exist.

There is a single moon orbiting the Malazan world, known as just “the moon”. There are gardens on the moon, tended by an unknown god.

The known continents, subcontinents and major islands of the world are as follows:

Off the north-eastern coast of the continent lies Otataral Island, the source of the magic-deadening ore of the same name.

Located south of eastern Seven Cities, equatorial Quon Tali is one of the world’s smaller continents, but it is also the most densely-populated, with at least a hundred city-states located across its extent. Quon Tali is the home of the Malazan Empire, which began expanding from Malaz Isle off the continent’s south-eastern coast.

Quon Tali is warm, but would be far warmer if it was not for the vast glaciers located in the Great Fenn Range. The product of Jaghut sorcery, these glaciers keep the continent temperate and cooler than it ought to be.

The subcontinent of Falar lies to the north of Quon Tali, just south of Seven Cities. Falar consists of the Falari Peninsula of mainland Quon Tali and the Falari Isles, a huge archipelago dominated by several trading cities.

Genabackis is located east of Seven Cities and north-east of Quon Tali, across the Meningalle Ocean (also called Seeker’s Deep). A long, thin continent, it is dominated by city-states such as Darujhistan, Pale and Elingarth.

Located south of Quon Tali, separated from Malaz Isle by the Strait of Storms, is a battered wreck of a continent. Over 110,000 years ago, this continent was smashed asunder by the Fall of the Crippled God, which left the landmass covered in craters, trenches and other substantial blast damage. The ocean rushed in, leaving the continent a splintered and broken morass of islands.

Over time these islands developed nations, which have given as many names for the continent as there are islands, resulting in cartographic confusion. The continent has variously been called “Korel”, “Korelri”, “Theft”, “Jourilan” “Fist” and more names yet still. The island of Fist is, arguably, the best-known to outsiders and has emerged as a popular name for the continent, but the other islands are less keen on it. The Malazans seem to prefer the name “Korelri”.

South of the continent-girdling Aurgatt Range lies the continent or subcontinent of Stratem. One of the more sparsely-populated known continents, Stratem is covered in forests, fields and mountains, with many leagues separating isolated towns and villages. Cities are almost unknown. The most notable settlements are the fortresses belonging to the mercenary army known as the Crimson Guard, particularly those located about the Sea of Chimes, a near-landlocked sea which opens into the Bloodmare Ocean at the Straits of Thick.

A more detailed map showing the approximate location of nations and major cities. Click to see a larger version.

Located to the west of Korelri, north-west of Stratem and south-west of Quon Tali is the island continent of Jacuruku. Once the ancient sister-continent of Korelri, the island was devastated by its ruler and High King, Kallor Eiderann Tes’thesula. Kallor murdered seven million of his own followers to forestall the judgement of the gods, incinerating entire cities and burning vast stretches of the land.

The Elder God K’rull swept away the detritus and pain of the continent into a new Warren and Jacuruku was left to recover. Today, Jacuruku is a land of sharp contrasts, divided by the Gangrek Range. To the west lies boiling deserts and deep canyons, whilst to the east lies the Jungle of Himatan, ruled by the goddess Ardata. Jacuruku is isolated from the rest of the world by extensive Jaghut icefields around the northern and eastern coasts, making approaching the landmass difficult.

Located south-west of Seven Cities and Jacuruku, and far to the west of Stratem across the White Spires Ocean, lies the continent of Lether. Lether is huge, the second-largest continent in the world (behind only Seven Cities), but it is relatively little known. The kingdom of Kolanse lies at the eastern end of the continent, closest to other continents, but it has had little contact with the rest of the world.

Thousands of miles to the west, beyond the vast Glass Desert and so far away from the rest of the civilised world that it’s little more than a rumour, lies the more densely populated part of the continent. South of the Dracons Sea (a near-landlocked sea in the south-west) lies numerous small kingdoms and city-states. To its north lies the large Kingdom of Lether. North of that kingdom lies a region of glacial ice. The western coastal region of this ice area is populated by the mysterious people known as the Tiste Edur.

South of Genabackis and east of Korelri and Stratem lies the continent of Assail. Assail is relatively unexplored due to the continent’s reputation as a place of lethal violence and the rumours that the bizarre and fearsome race known only as the Forkrul Assail is still extant somewhere on the continent.

The Blackstone Mountains and Black Sea divided the northern part of the continent, which is the more ill-omened and dangerous, from the subcontinent of Bael to the south. Bael is safer to visit for outsiders.

Please follow this link for a depiction of the map as it appears on a globe: https://www.maptoglobe.com/BkIqmzd-G#

Umryg is an island nation believed to lie east of Genabackis (although this is speculative). The island was reportedly devastated in a war between the natives and the Crimson Guard.

The Cabal Archipelago is believed to be located along and just off the coast of Seven Cities, possibly in the far west or south-west of the continent. Cabal was originally a colony of the First Empire (the first great human nation, located in Seven Cities) and outlived that nation. It controls both an archipelago of islands and mainland holdings in a mountainous region.

Credits: Based on the original maps created by Neil Gower. Extrapolated by D’rek at the Malazanempire forum. Placements and names adjusted by myself. Based on the Malazan Book of the Fallen series, Kharkanas Trilogy and Witness Trilogy by Steven Erikson, and the Malazan Empire and Path to Ascendancy series by Ian C. Esslemont.

1 thought on “Malazan Maps of the Fallen 01: The World”