In our previous post, I looked at the Wonders Made by Man, the nine greatest artificial structures of the world as chronicled by Lomas Longstrider. Lomas also wrote an additional book about which we know much less, simply entitled Wonders. This book explored seven natural wonders of the world. As of A Dance with Dragons and The World of Ice and Fire, we know only of one of the natural wonders: the immense underground cave system in the hills and mountains north of Norvos. The others remain unknown.

Map showing the potential candidates for the Seven Natural Wonders of the Known World, as envisaged by Lomas Longstrider in his book Wonders. Only one, the Caves of Norvos, is known to be part of the list.

We can, however, made good, educated guesses on what at least some of the others might be. We know that Longstrider never visited Asshai or the Shadow Lands, otherwise the forbidding shadowed valleys would likely feature heavily. It’s also unlikely he visited Ulthos or the Saffron Straits. We also know he didn’t travel east of Ib in the Shivering Sea, so the Thousand Islands, N’Ghai and Mossovy are likely also not included on his list. From the discussions of his visit to the Summer Islands, it also sounds like he avoided travelling to Sothoryos after hearing of its extremely lethal jungles.

Other possibilities are as follows, arranged in order of likelihood.

Beyond these obvious entries, things get a bit more speculative. 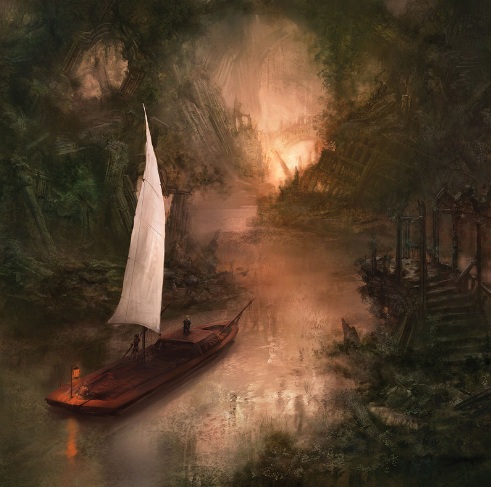 The Rhoyne as it passes through the ruins of the festival city of Chroyane. This stretch of the river is known as “The Sorrows”. Art by Marc Simonetti.

As with the list of manmade wonders, we’ll have to wait and see if George R.R. Martin will expand on this list in future books. In the meantime, we are free to speculate.

1 thought on “The Seven Natural Wonders of the Known World”