The Official Companion Book™ has a long history in the field of epic fantasy. You know that your series has officially “made it” when you can justify putting together a big coffee table book featuring new information, artwork and maps about your fantasy world. There have been numerous such books about Tolkien, most of them posthumous. Other writers have worked on companion books directly: Robert Jordan gave guidance and approval to Teresa Patterson’s The World of Robert Jordan’s The Wheel of Time (1997), and Terry Brooks did the same for The World of Shannara (2001). The less said about Midkemia: The Chronicles of Pug (2013, a companion guide to the Riftwar novels) the better, but the other companion guides mentioned here are certainly worth a look if you’re a fan of those worlds. 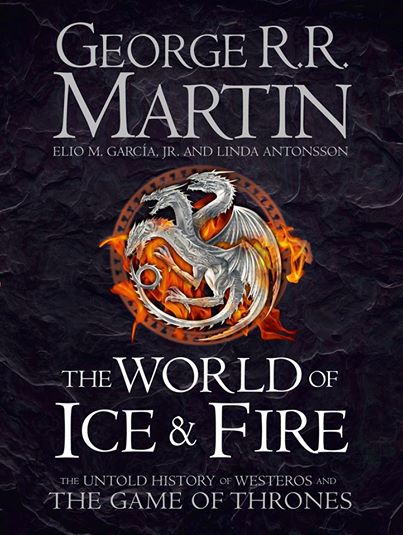 The World of Ice and Fire (2014) does the same thing for A Song of Ice and Fire, of course, and is one of the best examples of its type. Co-written by Martin and westeros.org webmasters Elio Garcia, Jr. and Linda Antonsson, the book features extensive amounts of new information about the history of the Seven Kingdoms, the lands of Westeros and Essos and religion. It’s perhaps not as in-depth as one may wish (roleplaying fans may miss the lack of hard information about trade routes or cultural details) and the book’s conceit that it is from the POV of a maester of the Citadel and therefore may not be 100% reliable means that not everything in the book can be taken automatically as the truth, but it is certainly the best companion book written so far about Martin’s world.

Michael Gellatly’s map of the Known World from The World of Ice and Fire. Note that Westeros extends further north and Sothoryos further south on this map than any other we’ve seen.

The book also features new maps from Michael Gellatly. These maps are beautifully-drawn but are more paintings than maps of utility, although they do at least make nods to information such as what each region’s major exports are. Some new, canonical information is provided on them such as the location of Stone Hedge and the existence of the Weeping Town of the Stormlands, but for the most part they are  similar to the existing maps from the books.

Michael Gellatly’s map of Dorne from The World of Ice and Fire. This map shows the castles of the land but also the location of wells and olive groves. The curious habit of not naming the Torentine – the river Starfall sits on – also continues.

One key difference is the world map provided at the start of the book. Although it does not go as far west or east as the Lands of Ice and Fire map (the Lonely Light and all the lands east of Qarth are omitted) it does actually extend considerably further north and south. More of the coast of Sothoryos is revealed and the lands beyond the Wall are shown extending out eastwards and westwards far to the north, hinting that they link to a possible polar continent. A substantial amount of land to the east of the Lands of Always Winter is also shown, possibly what the book itself refers to as Cannibal Bay and vast mountain ranges rearing above the ice of the furthest north along the Shivering Sea.

This brings our look at the official maps of Westeros and Essos based on the books and approved by George R.R. Martin to a close. However, there is another set of maps out there that look a little different. These are the maps based on the TV series rather than the books, and the differences between them are intriguing.